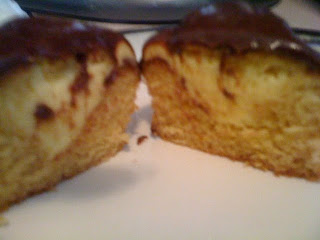 My friend Dana, who is gluten intolerant, had a birthday picnic last month.  So, I decided to bake some gluten-free treats that turned out rather well, so I thought I’d share them: gluten-free chocolate chip cookies, and gluten free Boston Cream Cupcakes.

Unlike the cookies, which were from scratch, I decided to try the Betty Crocker Gluten-Free Yellow Cake Mix as a base for the cupcakes.  I hit upon the idea of Boston Cream cupcakes because I had read mixed reviews of the BC boxed mix, so I wanted to be able to dress up the cupcakes a bit, just in case.  And, happily, I discovered that both Jell-o instant pudding mixes and BC tub frostings are gluten-free, which took a lot of guesswork out of the filling and frosting.  Jell-o pudding mixes list “modified food starch” under the ingredients, and this is corn starch unless otherwise stated, Kraft is very diligent about listing allergens.  This opens up a ton of possibilities for flavors and fillings. Obviously, if someone is also casein intolerant, other arrangements for fillings would have to be made. I’m definitely not an expert on non-dairy fillings, but I’ve heard (although I haven’t tried it for myself) that the non-instant pudding works better with soy and almond milk than the instant.

Before trying the cupcakes, I searched around to find other people who had already tried the mix, to see if anyone had tweaked the box directions to get a better result, and I hit upon a fabulous resource, A Gluten-Free Guide, which has all manner of gluten-free info, recipes, restaurant lists, food reviews, etc. On this site was posted a review of the BC gluten-free yellow cake box mix, along with tweaks that the author said vastly improved the cupcakes’ taste and texture (backed up by reviews posted on the site). It called for adding, amongst other things, instant pudding and orange juice directly to the mix. So, I decided to give it a try, and they turned out better than I had even hoped.  However, and I can not stress this enough, pudding flavor does make a difference in taste, and if you can find it, I definitely recommend the French Vanilla pudding over the regular vanilla, for both the cake and the filling. 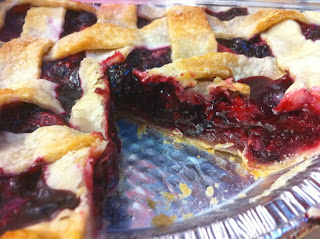 Wow. All I can say is, wow. I tried making a triple berry pie on a whim, not really expecting much from it, and I just might have found my favorite fruit pie. Ever. No mean feat, since it had some stiff competition from blueberry and cherry, not to mention key lime and lemon meringue.  But this pie has an edge, at least for my tastebuds. Not only that, but it is incredibly easy to put together. You can probably use any combination of berries you want, adjusting the sugar content accordingly, but I went with fresh blueberries, raspberries, and blackberries. 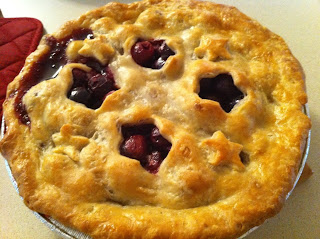 I have a confession to make. Prior to this pie, I’d never made a cherry pie using fresh cherries before. Or even frozen cherries for that matter.  I’ve always used Comstock cherry pie filling. But after making this pie, I can tell you that I will never use Comstock filling again. Not that Comstock pie filling is bad – it isn’t. And it has a home in certain recipes, such as a cheesecake topping. But in pie form, it tastes nothing like the real thing, and the real thing is fabulous.  This recipe, which I modified from a recipe I found on Smitten Kitchen, is meant for sweet cherries. I searched high and low (too late in the season), because I had my heart set on making a sour cherry pie, but it was not to be. I couldn’t even find frozen sour cherry berries. Next year, I will make sure not to miss my local orchard’s sour cherry picking season, which is typically for 2 or 3 weeks sometime in the middle of June.

Cherries are “stone fruits” or “drupes”, meaning that the fruity flesh surrounds a hard pit, the endocarp that contains the seeds. Cherries are part of the genus Prunus, along with apricots, nectarines, peaches, plums, and almonds. Most eating cherries are divided into 2 types: sweet (Prunus avium) and sour (Prunus cerasus).

Wild cherries have been considered good eats since prehistoric times, and the first known example of cultivated cherries dates from 72 BC Rome, where it was introduced by Lucius Licinius Lucullus who was, amongst other things, a Consul of Rome, brother-in-law of Cato and uncle-in-law of Julius Caesar’s assassin Marcus Junius Brutus. Cherries were first introduced to England in the 16th century by Henry VIII.

I made this particular pie for the 4th of July weekend, the “red” to complement the “blue” blueberry pie that I made. Like that pie, this recipe is for a 2 crust pie, although I have seen cherry pies with a crumb top before. And also like this pie, you can do up the top crust in a variety of ways, although I chose star-shaped vents to match the 4th of July theme and my Blue pie. I didn’t take many pictures of this particular pie, but you get the idea. 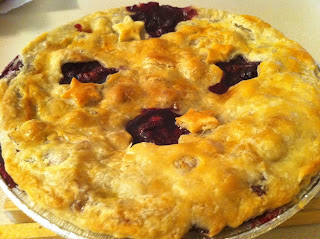 As part of my summer fruit baking theme, and as part of a delicious 4th of July weekend, I decided to make several fruit pies, the first being blueberry. I love a good blueberry pie. In fact, it might be my favorite fruit pie of all time. It is mostly because of the flavor, but also partly because I am sentimentally attached to blueberries – my Yia-Yia had blueberry bushes in her backyard, and I was forever picking blueberries in the summer when I would visit her. Unfortunately, I dropped the ball with picture-taking with this recipe, and the cherry pie. In fact, for most of my 4th of July recipes: I was working so fast, I didn’t even pause to take good shots. But, the few pictures I have should give you a good idea. 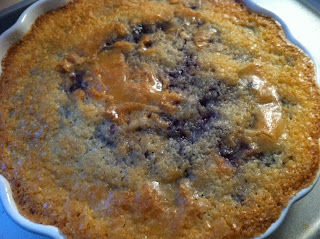 On her website, Ree had a debate about cobbler recipes. Now, I’m not normally one for cobbler, but when I saw her pics and saw how easy it was, I figured I’d give it a try. This recipe isn’t a true cobbler however, it seems somewhere between a berry buttermilk cake and a cobbler, I think. But it is nonetheless delicious, and pretty simple to toss together. I had been itching to make something with blackberries, so that's what I used, but you can use whatever berries you wish. 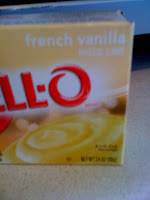 Not really. It’s better, and easier. The original Nilla banana pudding recipe is an actual cooked pudding dish. Bah. Too much work! And just using boxed pudding according to box directions is okay I suppose...but it lacks something – unless you tweak it just a bit. This dish is a snap, and I’ve never yet met a person who didn’t love this, and I’ve fed this to a lot of people!

The choice of pudding is crucial here. French Vanilla, not regular vanilla. If you’ve tasted both, you know what I’m talking about. If you haven’t tried the French Vanilla, get it. Sometimes it can be hard to locate, not every store carries it, but it is worth the effort, believe me.  If all else fails, you can get it here. I use this pudding for cream puffs and as a base for napoleon filling as well. Yes, Jell-o makes a “banana crème” pudding as well – but trust me and go with the French Vanilla. Synthetic banana flavor is not the taste we’re looking for. 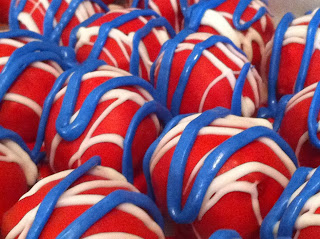 I’m just going to toss these out here, because I’ve posted cake ball recipes numerous times, but never Oreo balls. They are part of the same culinary family, as far as I’m concerned, and wickedly easy. Even easier than their cake ball cousins, if you can believe that, because – get this – you don’t have to bake anything. I’ll say it again: you don’t have to bake anything.

And you only need 3 ingredients: 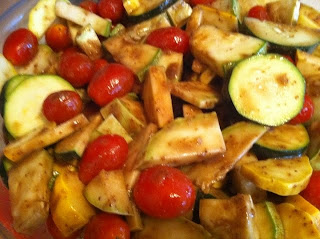 I have a friend. That friend has a farm share. Did everyone but me already know about these things? I didn’t, until I came to work at my present job, where all of my co-workers have a farm share. It is exactly what it sounds like – you pay for a share in a farm, and weekly during the summer, you get an allotment of fresh veggies, which constantly change depending on what is in season. It is a great way to 1) Make sure you eat your veggies; 2) Get exposure to some veggies you might not typically buy if left to your own devices; and 3) learn new recipes for said veggies. It really promotes seasonal cooking.

So anyway, my friend was going to be out of town, so he suggested that I pick up and use his farm share veggies for that week so that they wouldn’t go to waste, and I happily agreed. The harvest from that week (and imagine getting a comparable amount of fresh veggies every week in all different varieties), which was also conveniently right before the 4th of July weekend, included: cabbage, carrots, red and green onions, green beans, swiss chard, cucumbers, red beets, and summer squash. Lots of summer squash. As in 8 of them, a mixture of zucchinis, yellow pattypans and yellow crook neck squash. Now, I had managed to use up the cabbage and carrots, plus some cucumbers and onion making cole slaw and a pasta salad. The swiss chard and beet greens found a home being sautéed up as a side dish to some chicken. But what about the summer squash?

It is my firm belief that every picnic should have a nice, cold pasta salad. It is the perfect side dish to every conceivable bbq entrée. My first instinct was a tuna macaroni salad, but I decided to save that for another time. Instead, I decided to keep the pasta salad strictly vegetarian, and so I adapted this recipe from Ina Garten.

I wish I had better pics, but you get the gist. 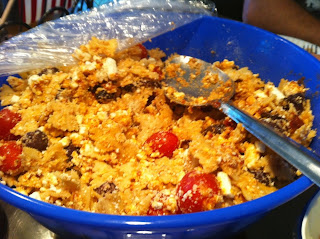 A good cole slaw is a must-have for any picnic. Personally, I love fresh raw cabbage, so a well-made cole slaw is one of my absolute favorite things.  But, prior to this past 4th of July weekend, I had never attempted it from scratch before.

So after hunting around on the internet, I came up with this recipe, which I found on Amanda’s Cookin’, but which is also posted on various other websites. This recipe happens to be a KFC cole slaw copycat recipe, and an excellent one at that. Make it the day before you want to serve it, and leave it in the fridge overnight to let the flavors mingle. You won’t regret it. Seriously, this is some good cole slaw, I got nothing but complements.

Now that summer barbecue season is here, I thought I should start adding some picnic-related posts. I made many of the recipes in this, and subsequent posts, for this past 4th of July. The first entry, BLT Dip, is a great addition to any bbq, or party in general. I brought it to two different parties during the 4th of July weekend, and it was a hit both places. My pictures are a little crappy, I was so intent on getting everything done for the 4th that I often forgot to take pics until it was too late. Hopefully you get the idea.

The recipe itself is very simple, I modified it from a recipe by Paula Deen: