Lemon Blossoms (Easy Things to Do With Cake Mix #3) 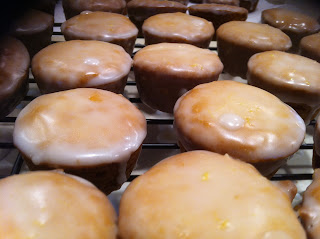 And, with this post, I am finally done with the three boxes of yellow cake mix that I had left over from Christmas. The first two were used to make Pecan Cake Bars and Raspberry Oat Bars, respectively. Both recipes are delicious and quick ways to use cake mix, with the raspberry oat bars being a real stand-out in terms of flavor and ease of assembly. For this last box of mix, I decided to stick to the fruity route, and I chose a recipe called Lemon Blossoms from Paula Deen, which are tiny little lemon cakelets baked in a mini-muffin pan and covered in a lemon glaze. I had it in mind to test as a potential Easter recipe (for some reason, Easter and lemons are always associated in my mind), plus it sounded like a great, bright, spring-time recipe now that Spring is officially here. 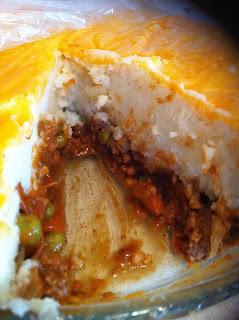 As you might have detected from several of my past blog posts, I like themes. I highly enjoy seasonal cooking and baking, to the point where I will cling to any excuse to incorporate a theme into my kitchen experiments. This post is no exception, although with far more legitimate origins. It is, after all, still St. Patty's season, which means, for me, that all things even slightly Irish in origin are a-go. So I decided to give Shepherd's Pie a try.

Shepherd's Pie, aka Cottage pie, is a meat pie topped with a mashed potato crust. Termed "cottage" as a reference to the poor people who could not afford to indulge in extravagant meals, this pie was originally conceived in the 18th century as a way to use up leftover meat scraps. It was paired with the potato due to the latter's affordability (potatoes were relatively cheap at the time). Originally, cottage/shepherd's pies were made with beef mince, and although both terms are still used interchangeably, many current shepherd's pie recipes contain mutton instead of beef (due to the connection between shepherds and lambs, presumably).

Hey, I'm a meat and potato kinda girl. But I'm also a "trying to get back in shape" girl, so I decided to give this recipe a try with some heavy modifications because: A) I don't like lamb; and B) I'm on a diet, so I need to try and keep things light. Mashed potatoes and "light" are not exactly synonymous, but I think this recipe does a good job. Don't get me wrong, because of my modifications, you won't entirely mistake it for a full-fat version, but it is flavorful and pretty healthy, while still tasting like comfort food. It goes without saying (but I'll say it anyway) that many of the ingredients in this recipe can be swapped out in favor of their full-fat counterparts if you wish.

Oreo Balls That Don't Need Refrigeration. Is there anything butter can't do?!

This isn't even a real recipe, but it is important enough that I wanted a post about it.

Oreo balls are amazing. They are one of the easiest and most popular things in my entire food prep repertoire. If you haven't tried making them, I can't recommend them enough. Wherever you bring them, people will love you. There's just one problem. They contain a block of cream cheese, which means they have to be refrigerated. While this isn't often a huge deal (they normally disappear too fast for this to be too much of an issue), it can present a problem if fridge space is short, or if they are going to be sitting out for a while (for a picnic, etc), or if you want to use them for something like event favors.

Oreo balls are already delicious and addicting, but I wanted to find a way to cut out the cream cheese without compromising the flavor, yielding an Oreo ball that would be just as delicious, but could be stored at room temp.  This St. Patrick's Day was the perfect opportunity since I was planning to make a batch of Shamrock balls (mint Oreo balls) anyway. 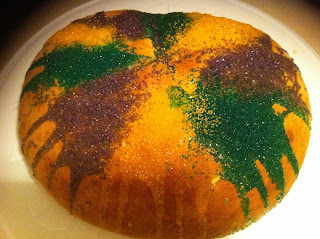 I have always wanted to try my hand at making a King cake, that purple, yellow and green colored sweet confection traditionally served during Mardi Gras, and this year was finally the year I managed to work it into my schedule. This recipe is a yeast dough, and is a little advanced because of the extra steps involved in using yeast, but it is not difficult. I will try to be as explicit as possible for those who have never baked with yeast before.

But first, how about a little background info on these colorful cakes?

In the title, I specify that this recipe is specifically for a Mardi Gras-style King Cake. I have to make this distinction, because there are actually many different types of King Cakes in many different cultures. Typically, these cakes are associated with the Epiphany, the 12th day after Christmas (aka Twelfth Night) when the 3 Wise men (aka the 3 Kings) finally arrived in Bethlehem to visit the Baby Jesus. The King Cake "season" extends from the Epiphany all the way until the day before Lent (Shrove Tuesday, or Fat Tuesday). 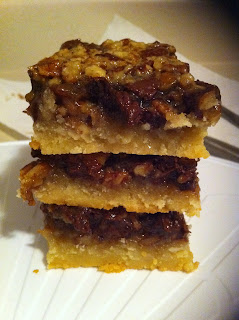 This is my second recent posting on pecan bars, and it is a recipe I have been wanting to try forever: a shortbread-based pecan pie bar. My previous pecan bars from a cake mix, while tasty, were not quite what I had in mind, so I decided to start from scratch, and make my own recipe. And this time, I decided to do something I had never done with pecans before: add some bourbon. 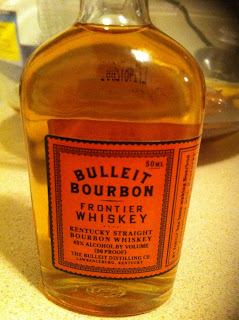 Now, bourbon has a long history of being paired with pecans in pecan pie, although how long, no one knows for sure. For certain, it is a Southern tradition. Bourbon, the drink, is named after Old Bourbon (present day Bourbon County) in Kentucky, the place associated with its invention. To this day, 95% of the world's bourbon comes from Kentucky, and the export of bourbon to the rest of the world is a billion dollar industry.

This recipe starts with the creation of a shortbread crust. I did this all in my food processor today, but I've made this dough before (for thumbprint cookies) in my mixer. Both work fine, so don't worry if you don't have a food processor. I have included directions for making with a mixer in the printable recipe at the bottom of the post.