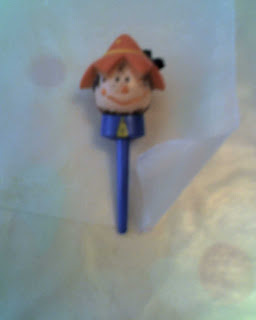 Class 3 of Wilton's first course is supposed to be the "Scary Clown Cake," which is essentially buttercream-formed clowns with clown pick heads. I am not scared of clowns, but they are definitely not my favorite thing. So, I figured that I would try to find an alternative to the clown head picks. I didn't find anything offered from Wilton, but at the ShopBakersNook (http://www.shopbakersnook.com/), they had quite a few 3-D head picks. I chose the scarecrow picks because I love fall, and because September is almost here. So I decided to make a scarecrow/harvest themed cake.

I envision a round cake (it would be better as a sheet, but I need a round cake for class) iced in light brown with a dark brown border. Then I can have my scarecrows as the focal point on the top or even hanging off the side. I also thought it would be cute to have some other elements on the cake to stress the autumn theme. The first element I found was cornstalks, off of the Wilton site, and I'd like to put those on the sides of the cake, maybe 3 or 4 times. I'd also like to make a little haystack using the grass tip (#233) and golden yellow icing (the same as the cornstalks). I am thinking of using a mini-muffin top as the base for this, but I haven't decided yet. I can also use this tip and icing to give my scarecrows straw hands and feet. In addition to the colors I need for icing, borders, the scarecrow bodies, stems and leaves, I also made some red and orange icing, for random things. I want to make sure everything isn't brown and yellow -- I want to make sure there is some red and orange too.
Some ideas I had for the top of the cake didn't seem viable to make with buttercream, so I

turned to fondant and gum paste. The first element I tried was to make cr

rows are the focal point. I bought pre-dyed fondant from Wilton (the one for faces) because it was already black, and I knew I would never get the fondant such a pure black dying it myself. I practiced making birds with the other colors first, to perfect my technique. I basically settled on the following method: 1) form the fondant into a ball; 2) gently pinch the ball 1/3 of the way down, making almost a bowling ball shape, but making the neck more narrow than the ball of fondant above it; 3) push the head down a little bit to make the neck thicker; 4) decide which side will be the front, and start to pinch out a little fondant from the head for the beak, and form the beak. For the wings, I found a Wilton fondant leaf cutter, and I used the smallest one because it was wing-shaped. I attached them to the back of the bird, and I will pipe on eyes (probably green so they stand out, although crows naturally have dark eyes) when I put them on the cake.
I also decided that I wanted a pumpkin patch, so I made some pumpkins. I started 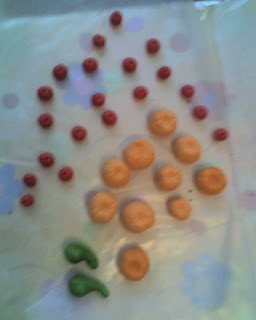 off with gum paste that I dyed orange, but they started drying very light and cracking, so I made more in fondant (I actually used the pale pink fondant that was in the pack with the black, and it worked fine dying it colors). I rolled them into balls, used the "umbrella tool" in the Wilton Gum Paste and Fondant Flower Tool Set to score up the sides of the ball (bottom to top) for segments, and then pressed down on the top with the shaping ball from the same kit to give them that slightly squished pumpkin shape. When they go on the cake, I'll pipe on brown stems and leaves and winding vines.
While I was making these, I dyed a little of the fondant green (marbled with a tiny bit of lemon yellow) and made 2 gourds for my punpkin patch. I basically formed them into balls, made bowling pin shaped, and then curved the top of the pin.

And, because I wanted a little color, I dyed some fondant red, an 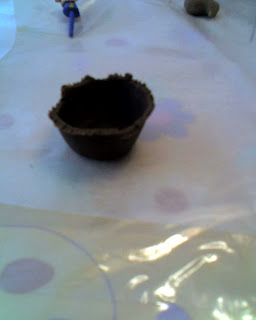 d made apples. They were very simple -- make small balls, and then push into the top with the narrow part of the umbrella tool -- this quishes it down just enough to give the ball an apple shape. Again, I'll pipe stems and leaves when I place them on the cake. I took dark brown fondant (pre-dyed from the pack I bought), rolled it out, and shaped it in a mini-muffin pan, to make a basket for the apples. I may leave it upright on the cake, but I kind of like the idea of an apple basket that tipped over, spilling apples out. I don't know if the basket will be firm enough to do that with however. 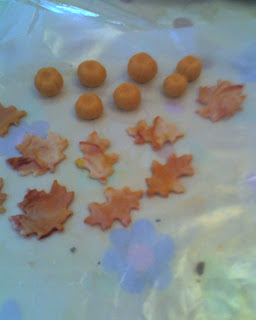 As a last touch, I marbelized the pink fondant from the pack with red, orange and yellow, and rolled it out. I then cut it with some little leaf cutters that I had as a part of an autumn-themed pie vent cutter set. They turned out pretty -- another splash of color for the sides of the cake, so I am going to incorporate them on the sides somehow.
Posted by Meredith P at 3:45 PM